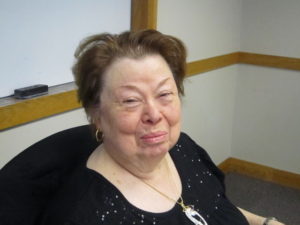 The annual Dorothy O. Helly Works in Progress lecture series is named in honor of Dorothy O. Helly, Professor Emireta of history and women studies at Hunter College and invaluable member of the WWWL Steering Committee. The lectures, held in October, offer a member of the seminar the opportunity to discuss her ongoing work on a biography or a memoir. The lectures are open to the public and cosponsored with The Leon Levy Center for Biography, CUNY Graduate Center’s PhD Programs in History and English, MA Program in Liberal Studies, MA Program in Women’s and Gender Studies, The Center for the Humanities and The Feminist Press.

The next Helly lecture will be in Fall 2023.

This entry is licensed under a Creative Commons Attribution-NonCommercial-ShareAlike 4.0 International license.

Need help with the Commons? Visit our
help page Send us a message

Built with WordPress Protected by Akismet Powered by CUNY